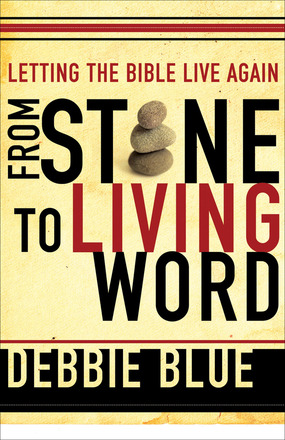 Christians have viewed the Bible in various ways: as a map to follow, an instruction manual for life, a moral code to live by. It’s been called a firm foundation, a sword, a rock.

But what if the Bible is more like an octopus than a rock? What if it’s wild, unpredictable, and unmanageable?

In From Stone to Living Word, author and pastor Debbie Blue shows how Christians have treated the Bible as a firm foundation–and thus an idol–rather than a “living response to a living being.”

In the opening chapters of the book, Blue shows how Christians read and preach in ways that lean toward idolatry. Then she sets out to dismantle this tendency by interpreting important biblical themes such as creation, incarnation, atonement, and resurrection in a new way. Her reflections transform the familiar into something strange, new, thrilling, and alive.

In a world where idols are used to divide and oppress, Blue’s recognition of the tendency to idolize the Bible frees Christians from preconceived notions, allowing them instead to discover new possibilities.

Blue’s fresh and sharp insights will appeal to everyone from those who find the Bible irrelevant or suspect to those who are looking for a way to make their faith alive. Her winsome, honest, and often amusing writing captivates and inspires.

“From Stone to Living Word is a brilliant and dazzling book that invites us to read scripture with renewed wonder, curiosity, rigor, and imagination. In a literary voice that is at once lyrical, earthy, and smart, Debbie Blue writes with a generosity of spirit, humor, humility, and clarity about a topic that is so often fraught with technical debates and controversy. In this intensely readable book, Blue calls us beyond mere intellectual engagement with text to encounter the present reality of the living God.”–Mark Scandrette, author of Soul Graffiti

“For many, scripture is the fossilized detritus of rationalism and moralism. Debbie Blue’s soulful reconstitution of the Christ narrative is nothing short of divine alchemy. Absolutely brilliant.”–Sally Morgenthaler, coauthor of An Emergent Manifesto of Hope

“First off, it must be said without equivocation: Debbie Blue is a brilliant writer. She masterfully and winsomely weaves the sublime and the mundane, the stones and the living words. And we can all count ourselves blessed that she has turned her literary talents on the Bible, that tome that many of us feel attracted to and repelled by at the same time. Debbie Blue will help you fall in love with the Bible (again). If you long for living words, read this book!”–Tony Jones, author of The New Christians: Dispatches from the Emergent Frontier

Illustration by Jim Larson, from Consider the Birds